It is important when swimming at any of Australia’s beaches that you swim between the red and yellow flags.

These areas of beach have been judged to be safer and are patrolled by Surf Life Savers. Swimming outside the flags can be very dangerous and, unfortunately, several visitors from overseas drown every year by ignoring this basic rule of safety on our beaches.

More information in the Australian lifestyle can be accessed here:

Australia is the 6th largest Country in the world covering around 7.6 million square kilometres

Today’s Australia is very multicultural with Indigenous peoples and migrants from some 200 countries.

Over 200 different languages and dialects are spoken in Australia including 45 Indigenous languages. The most common non-English spoken languages are Italian, Greek, Cantonese, Arabic, Vietnamese and Mandarin.

It contains an amazing ecosystem with unique flora and fauna including pristine rainforest, ancient rock formations and beautiful beaches.

Both day time and night time clear skies allow for beautiful blue skies during the day and the night sky brings out the stars.
Australia is made up of six states and two territories each with their own unique land marks, weather climates and diverse cultures.

The six states are:

More than 100 ethnic groups are represented in Australia, making Australia one of the most culturally diverse countries in the world. Australia‘s dynamic multiculturalism can be attributed to its unique combination of Indigenous cultures, early European settlement and immigration from all parts of the world.

English as it is spoken in Australia is very easily understood by nearly all people from other English-speaking nations. While there are some minor differences in accent between the cities and country areas the difference is much less than you will find in America, Britain and Canada where French is also spoken. As you improve your English in Australia you will learn some of our slang, and have much fun explaining the meanings to your friends and relatives at home.

Bribery is defined as the act of taking or receiving something with the intention of influencing the recipient in some way favourable to the party providing the bribe.

Australia is rated as one of the most transparent countries in the world, and visitors are strongly advised: DO NOT OFFER BRIBES to any Government officials including Police, Customs etc.

Australian Laws have strict penalties for Bribery the maximum penalty for an individual is 10 years Imprisonment or a fine of 10,000 penalty points (AU$1,100,000)

The standard voltage for electrical items in Australia is 240V. Electric plugs have three flat pins (figure 1) – one of which is an earth pin. You may need to buy an adaptor (figure 2) or have the plugs changed when you arrive. Note: In the figure 1, the red dot indicates that the switch is on and power is flowing through that socket. 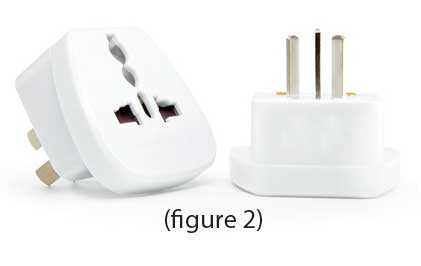